Companies offer to pay for female employees to freeze eggs 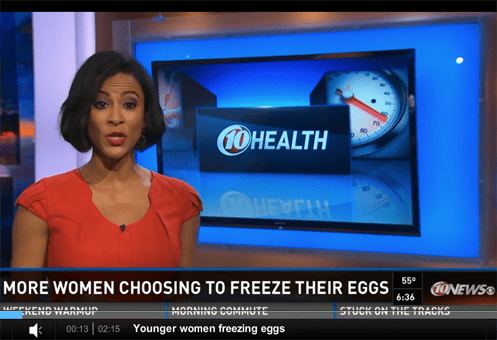 By: Courtney Robinson, Action 10 News
TAMPA (Action 10) – It’s easier, more successful and younger women are opting to freeze their eggs to get pregnant later in life. Fertility specialists say they’re seeing women younger than 35 choosing to have their eggs harvested and frozen until they meet Mister Right.

“Most of the women who come in are not necessarily doing it because they’re deferring for their career. They’re doing it more so because they are not ready yet. They haven’t met the right person yet and that’s the vast majority,” says Dr. Sandy Goodman with The Reproductive Medicine Group.

Becky Schreffler chose to freeze her eggs a year ago to increase her chances of getting pregnant. “We tried for five years before we even got pregnant and I just never. I always saw other people with babies and I thought, ‘I want that so bad’ and I never thought it would happen and it’s just a big roller coaster of emotions,” says Schreffler. The 27-year-old is now a new mom to a four month old.

Schreffler says she went through years of wondering if she and her husband would ever conceive. Doctors harvested and froze 13 of her eggs. Once she was ready, six eggs survived and were fertilized. She only needed one. As for the process she says it was painless. She tried to focus on success stories to keep hope that her eggs would keep, “It was really surreal, but I was willing at that point to do anything to have a baby.”

Dr. Goodman says the success rate is roughly 55%, “Not every egg that’s frozen in time is going to survive the thaw or fertilize and that’s why the quantity is very helpful to have more available.” That’s why a woman’s age plays a big role in the success of egg freezing. The younger a woman is the more eggs that can be harvested. Age also lowers the risk of miscarriage and genetic disorders such as Down Syndrome.

“I couldn’t imagine and now I can’t imagine my life without her,” says Schreffler. She and her husband still have frozen embryos in storage and if they need to in the future they won’t hesitate to use them.

Dr. Yeko Discusses the Ability for Women to Freeze Their Eggs to Increase the Chance of Conceiving Later